Here is your final update on the Route 40 Railroad Crossing Replacement Project.

Thanks to everyone for their patience during this project.

The Route 40 railroad crossing reopened as of Saturday, August 17th at approximately 8pm.

While the roadway and crossing have reopened to traffic, there will be limited lane closures in the area to complete the final paving. The lane closures will take place this week (August 19-23) from 7:30pm until 5am. Track work, drainage and sidewalks are complete.  This week, during evening hours, the contractor will finish paving and grading/seeding of the medians.

DelDOT wishes to thank everyone for their patience during this project.

Norfolk Southern is finalizing the railroad grades on the Route 40 Railroad Crossing Project.  Contractors are continuing paving work on the site, with paving tie-in work occurring today, tonight and through the weekend.

On Wednesday, August 14, 2013 during the day, the contractor completed the final drainage pipe run under the railroad tracks.  All drainage across Route 40 is now fully operational.  To complete the work they utilized two superintendents, two operators, two skilled laborers, and three unskilled laborers along with excavators, a backhoe, a frontend loader, and a trench compactor.

Also on Wednesday, August 14, the remaining concrete sidewalk was installed, as well as the curb opening on the westbound lanes on each side of the track.    Hotmix asphalt patching was placed between the existing roadway and newly installed curb.     Work remaining consists of placing the ADA compliant rail crossing section and the island on eastbound lane east side (this was removed to facilitate U-turns for the travelling public).

Last night (Wednesday, August 14), the contractor graded the roadway adjacent to the tracks and placed asphalt on the eastbound and westbound lanes west of the tracks.

Today, Thursday, August 15, Norfolk Southern will set grades on the rail replacement and compact under tracks.  The contractor will install the pipe extension at the drainage outlet and will grade and place hotmix on the east and west bound lanes east of the track.

On August 13, 2013, New Castle County received a heavy storm which flooded the Route 40 area.  The tracks were completely flooded across the entire roadway.  However, the newly installed drainage system worked very well, which allowed the contractor to get the water level down considerably.  They diverted it through the new system.

A concerted effort was made by all, and because of this the railroad itself was prepared for the day’s work.  The railroad company removed all the tracks across Route 40, excavated all the saturated material, placed stone, compacted and then paved under the tracks.  Next, they placed and rolled ballast stone and started to set track panels all by 5pm on Tuesday, August 13.

Due to the storm, the tracks on the Shellpot Line were washed out in one area.  Therefore, railroad traffic in Delaware was shut down most of the day on Tuesday, August 13.   The railroad company was definitely under pressure to get this track open.  Trains (including ones using the Route 40 tracks) resumed operation in the evening hours of August 13.

As for site conditions, material that had been placed in the road box in the railroad’s right-of-way will need to dry out, but that should not delay any major work activities.

After the storm passed, it was beautiful day, which gave the contractor the opportunity to move forward with the following work:

The rain did put the contractor slightly behind schedule, but the railroad company has been outstanding and their work has saved time in the overall contract.  If work progresses well today (August 14), the contractor should be back on schedule by the end of the day.     Work today, August 14, includes setting the casing pipe under the rail and completely tying in the new drainage system. 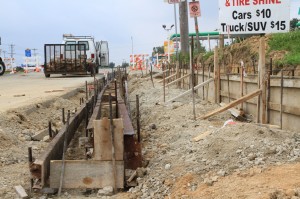 On August 12, Mumford & Miller continued working between train traffic to:

Other work included:  continuing prep work for curb, gutter and sidewalk installation on the westbound lanes, west of the tracks, and placing base asphalt patching between the newly installed curb line and the roadway on the east side of the tracks. 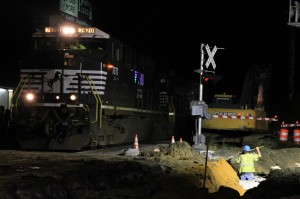 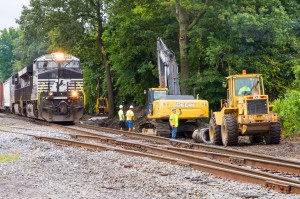