Greetings from Armstrong-Rogers! The crew worked hard this week to examine features uncovered during our backhoe work. We are continuing to learn a lot about this great site and are refining our interpretations with every stroke of the trowel. The stone and brick foundation has been cleaned to reveal a square outbuilding with a brick floor and an adjacent stone circular feature, perhaps a cistern. To the east of this foundation, though, is one of our site’s “mystery” areas. See the video below to watch Aimee Bolinger and Kevin McCloskey with Dovetail describe an intriguing feature on the site. 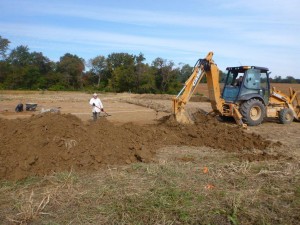 We started Data Recovery investigations with screening of additional sample plowzone units located over the cellar hole which was discovered during the Phase II investigations.  A sleeve link (now more correctly termed a “linked button” in the light of recent research on these artifacts) depicting King George II and Queen Caroline, possibly a Coronation commemorative of 1727 and matching another found earlier this season, was recovered from sample box 19.  The amount of artifacts recovered from the sample boxes is relatively low compared to the other sites from the 301 corridor that also date to the first half of the 18th century.  This sampling of the plowzone was followed by plowzone stripping in two areas, one measuring 100 feet square and the other 40 feet square.  The smaller of the two areas, lying closer to the Scott Run, was clean with only a few non-cultural features (such as tree roots and a rodent den) present.  The larger area revealed a host of prehistoric and historic features.  Prehistoric features appear to be a series of storage pits of indeterminate dates.  One pit contained a quartz scraper at the top of the subsoil.  Historic features consist of the large cellar hole nine feet by 11.5 feet (image), a few refuse pit (which currently appear to lie within a small post-in-ground structure), and scattered postholes.  The features have been mapped, photographed and assigned context numbers for recording.   Excavation of the features begins next week and the weather forecast looks good!

Feature at the Elkins B Site