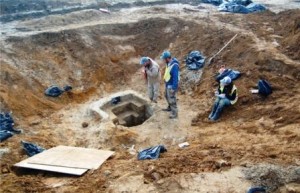 The last act of fieldwork at the Noxon Tenancy Site was the excavation of our wells. There were two on the site.  They were both dug in the same way: first, the well is dug to a depth of 4 feet by hand. Then, a backhoe is used to widen the excavation, creating a large hole around the well like the one in the picture above. Then, hand excavation resumes, continuing until the bottom is reached or the depth is too great. At the Noxon Tenancy Site, it was possible to reach the bottom of both wells this way. Once we reached the bottom of the wells, there wasn’t much else to do except clean up the site, pack up all of our stuff and head home for the holidays. 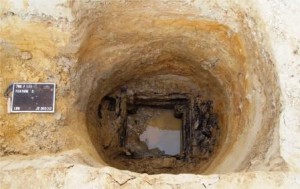 The bottom of one of the Noxon wells, with remains of the wooden lining

DelDOT and community leaders are planning construction of a 16.8 mile bicycle and pedestrian trail adjacent to the Lewes to Georgetown rail line.

For complete details of this project, please click below: 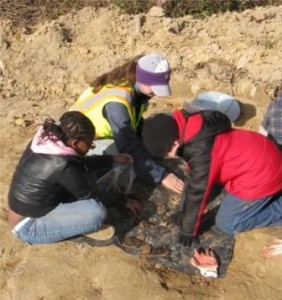 Last Thursday at the Noxon’s Tenancy site, we hosted a class of Sixth Graders from Dagsboro. They toured the site, saw some of our best artifacts, heard a little talk about how archaeologists learn about the past, and then helped us screen. We divided them into groups of three or four, with a screen for each, and one archaeologist at each screen. We thought it went very well. The kids seemed interested, and they enjoyed themselves. One even said it was the most fun field trip ever. We had set aside features to dig that would produce a lot of dirt with artifacts in it, so there was plenty to do and everybody found something. We found a lot of potsherds, and a fair amount of animal bone. The kids were on the site for about two hours, which was a good amount of time. After two hours they were losing a little focus, and we were exhausted. Maybe kids are especially keyed up for field trips, but we always find managing all that energy very tiring. How does anyone do it all day long?

A final hello from the Armstrong-Rogers site! In the video below, Dovetail President Kerri Barile highlights some of the great findings of the 9-week long excavation. Although it was determined that the main house site had been destroyed decades earlier, the team uncovered several outbuildings used throughout the farmstead’s period of occupation, from the 1730s through the 1870s. Remains included a dairy, two wells, a smokehouse, a series of intricate drainage channels, and many other historic features. Updates on the lab work associated with this field endeavor will continue to be posted as new finds are discovered. Thank you for continuing to follow our journey!

As of last week, the demolition sub-contractor has returned to the site mobilizing personnel, materials, and equipment. The contractor has started working on setting up scaffolding and safety lines for crews to access the remainder of the old bridge structure. This will continue through this week. In the coming weeks, the contractor will be working on preliminary setup work for the removal of the bridge girders. None of this work is expected to impact pedestrian or marine traffic at this time.

Bridge girders are expected to start rolling off of the substructure during the month of January. The removal of the piers and remaining substructure will start soon after. Pedestrian and marine traffic will be impacted during structure removal activities. As work progresses and activities approach the time to impact, traffic notices will be provided to the public outlining the schedule of impacts and their dates. The demolition work is expected to be completed in early spring depending on weather.

FAQ’s about the SR 26 Mainline Project

You’ve got questions? We’ve got answers about the SR 26 Mainline construction project

Q:  When will the next public information meeting be held for the SR 26 Mainline Project?

Q:  I’ve heard there is a Working Group formed for the project.  What is that for?

A:  A working group, made up of businesses, elected officials, and residents with various interests, has been formed.   This group will receive information from the project team and share it in the community, and will bring concerns back to the project team for discussion.  All working group minutes will be posted on the website.

Q:  How can I obtain information about the SR26 project?

A:  There are several ways to get information about the project.

Q:  I see work occurring this fall on SR 26.  Is the SR 26 Mainline Project underway?

A:  The work you are seeing this fall and winter is advanced utility relocation work, which is being done prior to roadway construction. It is imperative that utility poles be relocated prior to roadway construction so that the project can proceed without interruption.  Utility pole relocation is performed by crews that are under the direction of utility companies, not DelDOT or its contractors. Road construction is expected to begin in fall 2013.

Q:  Will work occur at night or during the day?

A:  The work schedule is still being determined.  On October 11, 2012 DelDOT sent out night work surveys to businesses and residents whose properties abut SR 26.   The results were tallied on November 16, and it was found that night work is supported by the community.  In addition to daytime work, night work WILL BE INCLUDED on SR 26.

Q:  Will work occur during the summer and what hours will they be working?

A:  DelDOT is sensitive to the seasonal traffic patterns in the state’s beach resort communities and will make every effort to schedule work in a manner that respects the needs of businesses, residents and visitors to these areas.  It is important to understand, however, that the road construction is very weather dependent and the most effective use of taxpayer dollars requires that work be performed in the summer.  We will be working with the project Working Group and our contractors to arrange a schedule that completes the work within a reasonable time period, while managing the summer traffic volumes to the best of our ability.

Q:  What lessons has DelDOT learned from previous projects that will allow this project to proceed more smoothly?

A:  DelDOT has learned several lessons with recent projects:

Q:   Will SR 26 be detoured at any point during construction?

A:  The only time SR 26 will be detoured is during the bridge replacements.  There are two bridges that need to be replaced, and traffic will be detoured onto the recently rebuilt roads to the south of SR 26 during this time.

Q:  Once the project is underway, will DelDOT use variable message (VMS) boards to advise motorists of the work occurring on SR 26?

A:  DelDOT will use VMS boards to advise traffic of work occurring on SR 26.

Q:  Is DelDOT planning to reach out to the cycling community or pedestrians to explain the SR 26 project?

A:  DelDOT’s press releases will include information pertinent to motorists, cyclists and pedestrians.  Pedestrian and bike paths, where they currently exists will be maintained.  However, for safety reasons, DelDOT cautions pedestrians and cyclists when entering active work zones.

A great deal of other information is available on this website.  Take a look around, and come back often as information will be updated regularly. 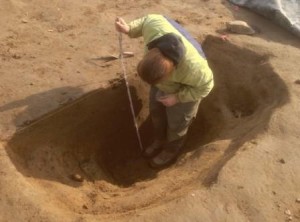 Feature Excavation – Over the last two weeks (excluding Thanksgiving) Berger has focused on Feature excavation.  Excavation of Feature 1 is now complete.  The feature proved to be highly irregular. It looks more like two adjacent three throws than a structure.  Feature 1 produced 569 historic artifacts and 578 pieces of animal bone, mostly pig and cow. The artifacts all date to the mid eighteenth century, and include numerous sherds of tin-glazed earthenware and scratch blue stoneware. The feature produced several brick pieces, none larger than a quarter of a brick. This is most of the brick recovered from the site. The brick, and the daub from the nearby pit features, is the only evidence of a house in this area; without the brick distribution, we might think the house was in the northeastern part of the site, around Feature 2 and the midden.  Excavation has begun in Feature 34, the well. So far the excavation is proceeding rapidly, because the feature has produced few artifacts. Half of Feature 2 has been excavated. This feature appears to be a small cellar hole with stepped sides. It measures 6 x 7 feet at the surface and is 2.4 feet deep. Artifact density was moderate throughout, all small pieces resembling the artifacts in the plowzone. 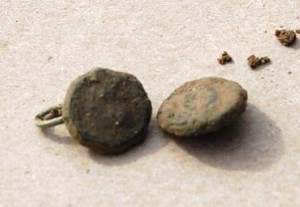