This week a number of personal items were found that tell us about the individuals who lived at the Rumsey/Polk Tenant/Prehistoric site. Most notably, thanks to the sharp eyes of archaeologist and crew member Neal Sexton, a decorated domed brass artifact was identified as the butt cap to an 18th or early 19th-century flintlock pistol handle. Hand engraved, the brass cap was part of a pistol believed to have been American-made and used by an officer in the Continental Army or a member of a militia during the American Revolution.  A pewter “USA” button worn by Continental Army soldiers, was found at the site, and was previously featured in a blog entry https://blogs.deldot.gov/2012/07/17/us-route-301-archaeology-update-9/), and further suggests one of the site occupants was a member of the Continental Army. Military objects could also have been owned by a member of the local Bohemia Battalion Mititia commanded by William Rumsey Jr., who was the owner of the site property at that time.  Other firearms material has been found at the site, such as French and English gunflints and a canon-style barrel of a flintlock pocket pistol displayed on our public flyer https://deldot.gov/environmental/archaeology/brochures/rumsey_polk/RumseyPolkFlyer.pdf 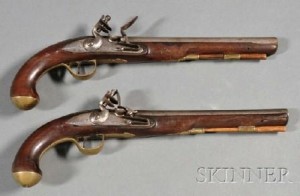 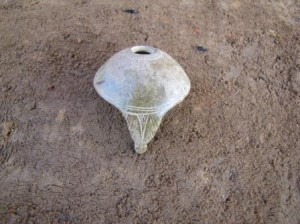 Additional artifacts found this week include an assortment of plain and decorated pewter and copper alloy coat and vest buttons; a fancy, decorative button with a glass faux gem; and pins used to secure clothing and paper (pins were used prior to the invention of wire paper clips).  During the 18th and early 19th century, men’s clothing contained an abundance of functional and decorative buttons, some of which we found littered across the site.  Objects like those featured in this week’s blog help us form a picture of the style of dress used by the occupants, and firearms used in defense. 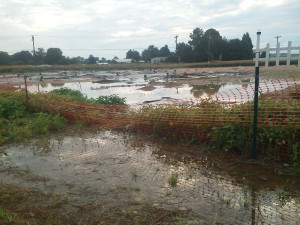 The Houston LeCompt site this past Saturday

The Houston-LeCompt Site has had its share of complications as fieldwork has gone on.  Saturday we arrived to find the site largely underwater due to torrential rains in the Middletown area.  It was a long day of bucket bailing, shopping for a sump pump capable of removing that much water, putting up with wet clothes, and sloshing in wet boots.  All of that fun archaeology stuff that never seems to make it into a History Channel documentary or Indiana Jones movie.  The nature of working on a site that has been stripped of topsoil also means that rains generate a sheet wash along the surface that carries fine silt and clay particles with it, that always seems to find its way to the exact features we were working on before the rain. This sheet wash covers the exposed features with a layer of slimy red dirt that leaves us starting the feature clean up process all over again.  Despite that, we have managed to move a lot of dirt, and are making our way through feature excavation.  We are exposing more of the brick cellar walls, and getting deep down into well shafts.  We also encountered a possible roasting pit with lots of charcoal and animal bone.

By Sunday we had the site partially drained, and dried out enough for an army of volunteers and observers.  Over a dozen volunteers plus family members came out as we opened up the site, not only for serious archaeology work, but also as an interpretive site and community activity center.  Kids young and old had a blast combing the back dirt piles for artifacts.  Area residents who had been passing by the site for weeks got a chance to shovel dirt out of the piles, screen for artifacts, and wash them.  A lady who had read about the site in the paper came to the site with her “LeCompte” family tree and coat of arms, which we photographed to see if historic research shows a connection between the previous owner James LeCompt and her family.   What a difference a day makes when you have a good crew.  Everyone on the Dovetail team did a great job of getting the public involved and going with the flow.  Our thanks to the crew, and thanks to the great folks of the surrounding community! 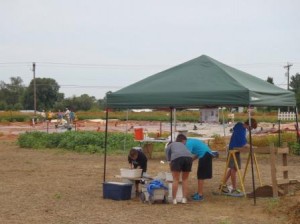 The Houston LeCompt site this past Sunday

Last week Hunter Research, Inc. started data recovery excavations at the Cardon-Holton Site (7NC-F-128, N14508), another early historic farmstead along the U.S. Route 301 alignment.  (Below is a link to a handout about the site.)

Historic research into this property indicated that from 1685 to 1722 this area was part of an extensive  plantation called “Riley’s Industry”, after which the property was owned by William Cardon from 1722 to 1760.  The site lies near the perimeter of the Black Marsh and close to the path of an unnamed branch of Augustine Herrman’s cart road, which was laid out around 1660.  This road was used for both legal and illicit trade between the Chesapeake and Delaware Bays.  The Cardon-Holton site now lies hidden beneath a lush crop of soybeans.  Prior to excavations, the crop had to be removed from the identified core of the site as well as from areas for stockpiling soils, for an access road into the site, and a parking area. Once the crop was removed, the center-line of U.S. 301 was shot in by surveyors from Century Engineering and the locations of excavation units from earlier phases of work were re-established. 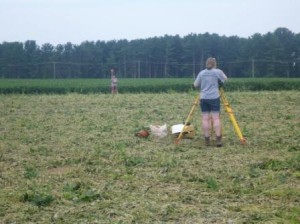 Initially six, six-foot square excavation units were targeted to recover artifacts from the plow-zone in areas where concentrations were observed on the surface and subsurface during the earlier excavations.  Numerous important artifacts dating to the late 17th and early 18thcenturies recovered from these first excavation units led us to increase the number to 16.  At the same time the backhoe was busy stripping off the plow-zone from the northern portion of the site.  Equipped with a sharp, flat steel collar, the machine leaves a crisp clean surface which is then refined with a flat-bladed shovel and trowels to reveal disturbances to the underlying subsoil, both cultural (such as pits and post holes) and non-cultural (such as trees and animal burrows).