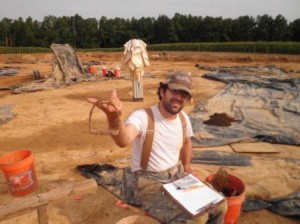 Giddy-yup! Food consumption and horse riding were the themes this week at the Rumsey/Polk Tenant/ site, and we found food remains and “horsey” items galore.  Several large trash pits dating from the eighteenth and nineteenth centuries were excavated this week.  A few pits that would have been used to store food, ie. “subfloor cold storage pits” in particular contained lots of evidence of the types of animals raised, ridden, and eaten on the farm.  Objects such as a stirrup and a horseshoe  revealed the former residents rode horses, an expensive commodity at the time, and one that required riding skills and equipment, horse stalls, and paddock enclosures.  Riding horses also needed to be continuously shoed by local blacksmiths, which created an added expense to horse ownership. These finds will be researched and may be dated to give us more clues about when horses were used at the site. Careful excavation by crew members also recovered tiny egg shell fragments–likely from chicken eggs– delicate fish bones, and teeth, leg, foot and shoulder bones from pigs and cows. The fish may have been caught in the nearby creek or were bought at the local market.  Domesticated chickens, pigs, and cows were likely raised by the tenants on the farm.  Extra meat produced during seasonal livestock slaughter was probably bartered for other goods with neighbors or local shop keepers, a common practice during the eighteenth and nineteenth century that strengthened social and economic ties between community members. 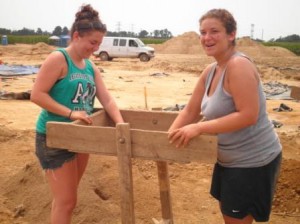