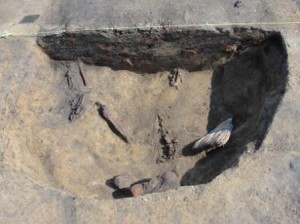 This week at the Cardon-Holton site started off with a downpour but ended with sunshine.  The backhoe was able to finish stripping the plowzone under less than prime conditions with the precision of a surgeon revealing several early historic refuse, storage cellars and of course postholes.  Stripping also revealed additional prehistoric pit features as well as some features of unknown affiliations.  These feature are in the process of being mapped onto the site base map and will be overlain  with data from the earlier phases of work.  With stripping behind us features are being selected for excavations.  At the base of one historic pit was an articulated juvenile pig skeleton with one ankle and foot removed (cut off) was perfectly preserved.  Perhaps they thought the meat went bad and disposed of the carcass in the pit.  The answer lies in the other half which we hope to remove next week.  An adjacent pit contained the poorly preserved remains of half of a cow’s skull with one horn butchered or cut right down the center.  We believe it was butchered in this manner to gain access to the brains which could then either be cooked and consumed or used for tanning leather.  A large cylindrical feature identified last week is becoming more interesting with each day of excavation.  Originally thought to be a well, this feature measures 12 feet across and was lined with wood for the first two feet below the plowzone leading us to then think it may be a cistern or icehouse.  The central fill material has the appearance of a cone typically associated with wells and at four feet down a square “shaft-like” stain became apparent in the center of the excavation leading back to thinking it is a well…so why does the cone have a lining?  Was this a temporary construction technique?  For this week we have shored up the walls of the shaft and hopefully we will learn more next week as we continue down.  Stay tuned for further developments! 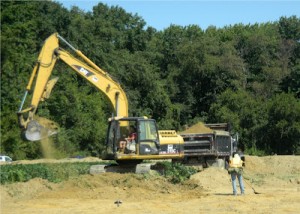 Excavator working at the Bird-Houston Site

This was a big week at the Bird-Houston Site, when we stripped off the plowzone to see what lies beneath. After two long days of following the excavator across the site, we exposed dozens of pits, post holes, and other “features.” This is exhausting work, shoveling up loose soil and trowelling off soil stains while standing amidst the noise, heat, and diesel fumes. It is also rewarding, because we find more and see more in one day than in weeks of hand digging.  Now we will turn to making a map of all these new discoveries, and then to excavating them by hand. 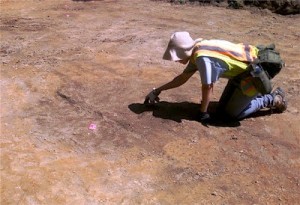 This dark stain may be a well 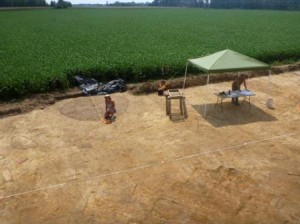 Joelle Browning measures the circular feature while Sue Ferenbach records the feature on the site map.

This week at the Cardon-Holton Site Hunter Research, Inc. was busy removing the plowzone revealing numerous features dating to the early 18th century and possibly the late 17th century.  Along the site’s southern border a large circular stain measuring 11 feet across was exposed.  An auger test placed in the center suggested it extended four feet below the bottom of the plowzone with fresh water currently at six feet below the base of the plowzone.  At first we thought it might be a shallow well but initial exploration revealed a void where wood once lined the upper two feet suggesting the shaft may have served as a cistern or an icehouse.  Further excavations should give us more clues as to the true function.  Artifacts from the initial excavation include a small eight-sided silver button with an inscribed flower, a few wrought nails and ceramics dating to the first half of the 18th century such as English made ceramics (Midlands mottled, buff-bodied Staffordshire ware, Jackfield ware, and black matt glazed red-bodied earthenware) and German Westerwald stoneware.   Mechanical stripping of the plowzone exposed several features originally identified in the initial testing.  Small bits of  North Devon sgraffito plates recovered from the plowzone lead to the discovery of the two large mending sherds pictured below recovered from the top of a probable refuse pit.  Larger sherds like these may help us identify the area in Devon from which they were made. 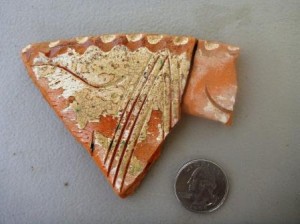