Alternative Mitigation of the Polk Tenant Site (7NC-F-111). This month at Versar we’re blogging about an example 3D cut-away model of an 18th or early 19th-century well found in New Castle County. Part of our task in examining the archaeological record of wells excavated across Delaware is to prepare 3D models that help show what they might have looked like, and how they were built. We’ve found evidence for at least four broad types of well construction: circular brick wells, circular stone wells, square or rectangular wood-frame wells, and barrel-lined wells. Wells had to be lined in order to prevent the sides from caving in. The material chosen says something about the kinds of resources available at the time. Barrels with the tops and bottoms knocked out offered a simple and expedient way to build the needed support. 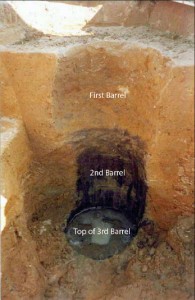 There was an excellent example of this type of well excavated by Versar for DelDOT at the Jones Site (7NC-J-204) during the State Route 1 project that we chose for our first model. The well was made from 3 barrels stacked on top of each other inside a hole dug some 12 to 15 feet into the ground to just below the water table. Only wood from the bottom-most barrel survived because it was saturated with water. The other barrels were found mostly as stains in the surrounding soil. Nevertheless, it was possible to accurately record the original shape and dimensions. 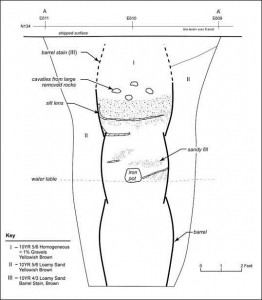 To make our model, we started with both photographs of the well taken while it was being excavated, and a measured profile drawing of the well prepared by field archaeologists. Our first step was to bring the measured profile drawing into Autodesk Maya, a software package designed for 3D modeling and animation. With the profile drawing as a reference, it was possible in orthographic view (a flat view with no perspective) to build 3D barrel shapes that match the size and shapes of the barrels we found in the field. We were also able to create a cut-away image of the surrounding soil showing the size and shape of the hole made for the barrels when the well was first dug. After the barrels were placed in the hole, the remaining open space was filled in with dirt. This fill dirt would have been a mix of all the soil excavated including dirt from near the top and bottom of the well shaft.  This mixing gave the fill a different color and texture from the surrounding earth, which is what allowed us to identify it. 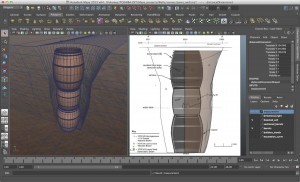 Once the model was built we added textures to the shape based on photographs of the wood we recovered on the site. Lastly we added lights to the scene and prepared this render of what a cut-away of the well might have looked like before the well shaft was filled back in. Over the next couple of months, we will be doing similar models of other types of wells found in Delaware.

Figure 4: cut-away reconstruction of the Jones Site barrel well before the excavation hole was refilled.