For the past two weeks Hunter Research has been testing a predictive model developed for the identification of physical remains of early roads in the Delaware landscape: in this case one of the late 17th century Cart Roads, probably laid out by Augustine Herrman and certainly in place by 1740.  We have termed it the “Reedy Island Cart-Road” because of its eastern terminus along the Delaware shore at Port Penn, opposite Reedy Island.  Reedy Island was a safe anchorage and is shown and named on all 18th century maps.  In terms of cross-peninsular trade from Herrman’s Bohemia Manor along the Upper Chesapeake, it was probably second in importance only to Appoquinimink (Odessa).  This particular route seems to have functioned as a cut-off to shorten the distance between Bohemia Landing to the southwest and Reedy Island to the northeast.

The overall objectives of these investigations are:

a) to test the predicted alignment of the Reedy Island Cart Road Alignment in a specific area where the depositional model predicts that physical features of the road would likely survive;

b) to document these features and compare them with the existing data, and

c) to establish the nature of the road crossing of the East Spring Branch drainage.

These research contributions are part of the overall alternative mitigation program for the Cart Road. 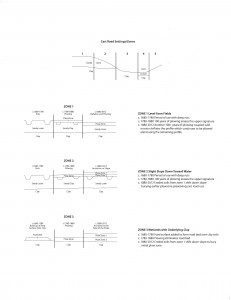 Zone 2:  Farm fields with slight slopes towards drainages and wetlands

Zone 3:  Wetlands, underlain by clay and lying adjacent to drainages

The following depositional conditions were predicted for these zones, based largely upon the data from Reedy Island Cart Road 4 and identified wagon tracks leading to a landing at the Rumsey Tenant Site 7NC-F-117:

Where the cart road crossed level farm fields, initial use created deep ruts within the upper sandy loam soils.  For over a century after the abandonment of the road (i.e. circa 1780 to 1880) animal-traction plowing would have erased the upper portion of the ruts, blending them into the plowzone, but possibly leaving lower components in place.  Subsequent mechanized plowing penetrated deeper in to the soil and increased erosion, especially through deflation on these level uplands.  Up to two feet of the upper soil profile appears to have been lost at some locations along the Route 301 corridor, as evidenced by heavily truncated historic features such as cellars and postholes.

As in Zone 1 the period of initial use would have created deep ruts in the upper sandy loam soils and the period following (c.1780 to 1880) would have erased the upper portion of the ruts blending them into the plowzone.  What differentiates Zone 2 from Zone 1 is the slight slope towards water courses.  In areas of slight slopes towards drainages eroded soils from higher adjacent areas (Zone 1) were accreted during the period of mechanized plowing, partly burying the earlier plowzone and preserving the truncated ruts of the cart roads.  On steeper slopes colluvial processes would tend to remove the material and deposit it further downslope.

Closer to the water the underlying clay lies closer to the surface.  There is slight evidence that gravels may have been  emplaced to form an informal  road bed above the clay in this.  Most of these clay areas were probably not plowed during the first century after abandonment but mechanized plowing in the 20th century took advantage of these marginal areas and likely erased any traces of the roadbeds

Crossings of the actual drainages would either have been by use of bridges or by means of a ford.  Fords could be quite informal, simply making use of a portion of the stream having a solid exposed rocky base.  This could be improved with wood corduroy or with gravel.  Bridges required capital investment and were not common in the 18th century, being largely confined to major roads or “king’s highways”.  The Reedy Island cart road spur is considered very unlikely have had bridges constructed along its alignment, and fords are much more likely at drainage crossings.

If the above model is valid, the best chances of documenting remains of the cart road within the proposed alignment were thought to be found in Zones 2 and 4 with a lower chance in Zone 3 and little or no chance in Zone 1.  The best potential area conforming to these criteria within the proposed alignment lies buried beneath the plowzone of agricultural fields on the slight slopes near the edge of the woods.  Elements of the cart road are also visible where a probable ford constructed of gravel was observed in the bed of the headwaters of northern branch of Drawyer Creek (East Spring Branch).  The ford was observed during the Phase IA walkover by Geo-archaeologist John Stiteler (A&HC 2009).

LIDAR (Light Detection And Ranging) is an optical remote sensing that can measure the distance to, or other properties of, targets by illuminating the target with laser light and analyzing the backscattered light. LIDAR technology has applications in archaeology, geomorphology and contour mapping as well as a host of other fields.  LIDAR operates on the same principles as radar and sonar.

LIDAR has many applications in the field of archaeology including aiding in the planning of fieldwork, mapping features beneath forest canopy, and providing an overview of broad, continuous features that may be indistinguishable on the ground such as the now buried 17th century cart road.  LIDAR can create high-resolution digital elevation models (DEMs) of archaeological sites that can reveal micro-topography that are otherwise hidden by vegetation. LIDAR-derived products can be integrated into a Geographic Information System (GIS) for analysis and interpretation.  Its ability to penetrate forest canopy has led to the discovery of features that were not distinguishable through traditional geo-spatial methods and are difficult to reach through field surveys. The intensity of the returned signal can be used to detect features buried under flat vegetated surfaces such as fields, especially when mapping using the infrared spectrum. The presence of these features affects plant growth and thus the amount of infrared light reflected back.

LIDAR imagery has been obtained for the project area and analysis is well underway by Seramur and Associates PC.

b. Testing for Physical Survival of the East Spring Branch Crossing through Non-Intrusive Survey

Testing the predictive model started with mapping of the probable ford location on the East Spring Branch.  The probable ford is the only location where the stream can currently be crossed without sinking into the stream bed.  It also aligns with the projected line of the section of the cart road identified to the west (Hunter Research, Inc. 2011b, Chapter 3).  On the east side of the stream an apparent borrow pit and a probable ramp leading to the ford location were identified in 2011.   Two large pieces of granite, which is not native to this area of Delaware, were identified at that time lying against the east bank of the stream.

Mapping required clearing of understory to facilitate use of the total station.  The map will present close-interval contour mapping based on a surveyed grid and will show specific features and topographic detail.

A combined Ground Penetrating Radar and Gradiometer Survey was undertaken with the objective of identifying the signature of the 18th century cart-road that is believed to have run through the project area.   Approximately two and half acres of surface area were covered in the field on the east side of the East Spring Branch.

Ground penetrating radar (GPR) and gradiometer data were collected using a GSSI SIR3000 GPR system equipped with a 400 MHz antenna and a Geometrics G858 Cesium Vapor Gradiometer.  A 2-foot grid was used in order to target former historic structures.  The purpose of the two 2-foot grids was to identify anomalies possibly associated with features of the cart road and artifacts.   Anomalies were marked in the field from the GPR as the surveys were conducted.  It was hoped that the GPR and gradiometer surveys would determine the location of soil disturbance related to historic cart road and related features across the property.  Based on a preliminary report adjustments to the field excavation strategy were geared towards potential targets.

An archaeologically directed backhoe with a flat-blade bucket was used to remove the plowzone in trenches, placed to cross the potential alignment or alignments of the cart road in areas where the geophysical survey suggests that features from the road may lie.  The prime objective was to expose the remains of the parallel ruts if present.  Following the stripping, the trenches were shovel scraped and trowelled to identify and define the cultural features.  Detailed mapping of each trench was then completed.

In addition to the search for visual identification of cart road features, a soil compaction investigation using a basic soil compaction meter/penetrometer was undertaken.  This provided immediate relative compaction data across both the predicted line of the road and adjacent portions of the field. Compaction results will be checked against the known road alignment on the west of the stream, where a single narrow supplementary trench was placed across the road alignment to re-expose the ditches/ruts.  Compaction testing was undertaken within, between, and outside the features.