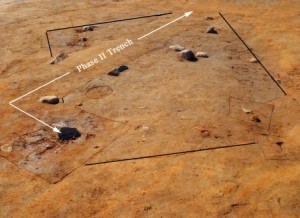 What a difference a week makes! Over the past week at the Houston LeCompt excavation, most of the mechanical stripping has been completed revealing myriad features, and many intriguing artifacts. It looks like the site core contains the main house cellar, at least six possible outbuildings, a potential well, and a historic sheet midden. While the individual features are certainly intriguing, exposing all of these features in plan has definitely given us a much better understanding of the layout of this farmstead and how the historic occupants of this tenant house lived and worked. Moreover, we are starting to grasp how the farm was modified over time due to technological improvements and changes in the residential composition. For example, the carriage house may have been replaced by a garage in the early-twentieth century. Preliminary evidence suggests that the carriage house was located behind the main house, while the possible garage was placed much closer to Boyd’s Corner Road, showing distinct changes in landscape use over time.

We were visited by staff from the Delaware Department of Transportation this week so we could share our preliminary results with the project sponsors. We also had several members of the general public stop by. While some made plans to come see the site, others stopped by for an impromptu visit after driving by the road and wondering: “What in the world are they doing?” Whether their interest was spawned by the sight of our large, open expanse of our fenced area or their curiosity on why people would be on their hands and knees in a dirt patch in 100+ degree weather is not known….

The really exciting part of our work comes next week, when we will start digging into our exciting features starting with the house cellar. When Archaeological & Historical Consultants conducted their stellar Phase II archaeological work on this site in 2010, they exactly pinpointed the center of the root cellar and excavated a trench diagonally down the center. Their data will greatly help in our analysis. Tune in next week to see what we find!