Work this week at the Elkins site concentrated on feature excavations.  Situated near the base of the knoll on which the stone-lined root-cellar lies is a low un-mortared wall consisting of limonite and local cobbles.  This wall traverses and blocks a now-shallow gully that eventually drains into Scott Run.  Soils situated on the downstream side of the wall consist of sorted sands, while soils located on the upper side consist of finer sands and silts, suggesting they had settled out from an impound of water.  We believe the people who lived on the knoll built this damn to hold back water either from a natural spring head or from rainwater passing down a gully leading to Scott Run.  This impound would have provided drinking water for their livestock.

West of the cellar hole, the small sunken-floored building described last week appears to be an out-kitchen, based on the evidence of numerous bone fragments, oyster shells and utilitarian ceramic red earthenware sherds from its floor.  Out-kitchens are separate structures situated near a house built to prepare and cook food without heating up the house during the warmer months, hence they area also known as summer kitchens.  We currently estimate that this out-kitchen was 16 feet long by 8 feet wide.  The nearby stone-lined root-cellar hole now appears to lie within the center of a building measuring 16 feet wide by 16 to 24 feet long.  These measurements are based on the absence of gravel at the bottom of the plowzone around the root-cellar.  Excavations within the northern portion of the root-cellar recovered the base of a light cobalt “flip glass”, also known as a tumbler (Photo).  Other high quality artifacts recovered from the root-cellar continue to suggest the people who once lived there were either wealthy or had access to expensive items.  One of the continuing debates among archaeologists studying the 18th century is when and how a “consumer” society developed in the American Colonies: a society in which people became interested in defining themselves more by the things they owned than in more traditional means of showing status such as social class and landownership.  Our 301 sites look set to contribute to that debate. 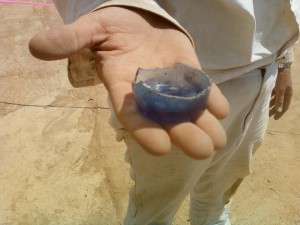 The feature we have for some time considered to be a well, located 45 feet from the root-cellar, has now become one of the most puzzling features at the site, and possibly on the Route 301 project to date.  This circular feature is situated on the side of the shallow gully that defines the northern boundary of the homestead.  The feature measures approximately 14 feet in diameter and extends three feet below the plowzone (Photo).  There are large posts positioned approximately every three feet around the perimeter.  Each post rests on a rock to prevent it from rotting.  The slabs situated in the middle exhibit signs of trimming or shaping.  They are formed from a light green sandstone whose origin is unknown…for now.  No other artifacts have been recovered from this enigmatic feature.  The lack of artifacts suggest that it may predate the house, as otherwise household refuse would have undoubted been part of the upper fill.  So what is it?  We have ruled out a well, privy, cistern, spring head, windmill, or silo.  One exciting suggestion is that it is a wolf trap.  Construction of wolf traps was mandated in this area during the 1680s and 1690s as attempts were made to eradicate wolves as pests.  The small crossroads settlement of McDonough, a couple of miles south on what is now Route 13, was originally called “Trap”.  Your thoughts, as always, are welcome. 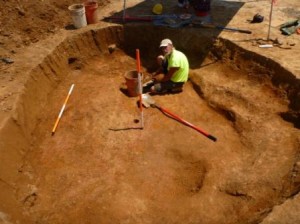 We are beginning another excavation on the 301 project!  Here is the link to a handout detailing this amazing site. 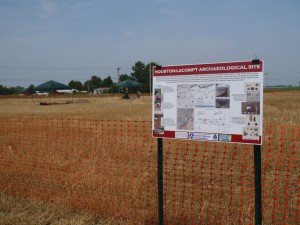 Fieldwork has begun at the Houston-LeCompt archaeological site despite the hot weather.  One good thing to come out of the recent storms is that the rain left us with good workable soil conditions.  That makes a huge difference when digging in this heat!  We are about halfway through the process of sampling the plowzone for artifacts.  Recovery so far has been very heavy in most of our sample areas, with thousands of fragments of historic ceramics and glassware making up the bulk. While is is sad that so many beautiful objects were broken up by centuries of plowing, it is a testament to how long and how frequently farmers have been working this land.  Among those thousand of objects, there are also a few gems, such as half of a tiny teacup from a child’s tea set, a thimble, pennies from the late 1800’s, and a hair pin set.   However, it is what is at the bottom of our sample units that is exciting to us as archaeologists.  We are seeing features underneath the plowzone, around the area where the foundation and cellar were found during previous work on the site.

Weather permitting, we will finish plowzone sampling early next week, and begin mechanical stripping of the site.  We are hoping that once the backhoe starts clearing large areas, the features we can see now will connect to others, possibly to form outlines of additional outbuildings or fence lines, or expand to  reveal trash pits, wells, or privies.  With the site located right along Boyd’s Corner Road, we have had curious onlookers and visitors stopping by already.  We are looking forward to working with volunteers and helping local residents learn more about both the archaeological process and the people who once lived on this farmland.