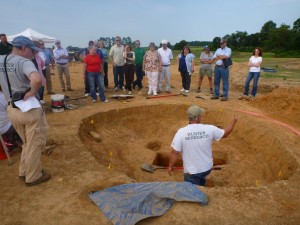 The last week of work on the Elkins Site saw a gathering of historic preservation specialists from the Delaware Division of Historic and Cultural Affairs, including State Historic Preservation Officer Timothy Slavin.  This meeting enabled the team to share ideas with other specialists and to discuss interpretations and strategies for the site.  Meanwhile, the Hunter Research historians have been following a trail of archival clues to help us identify past land uses and the people who occupied the Elkins site during the 18th century.  Colonial land records have led us to the conclusion that what we now know as the Elkins farm property was divided into two farmsteads of approximately 100 acres each during the first four decades of the 18th century.  The boundary between the two 100-acre tracts has proven somewhat elusive because the old boundary markers, mostly oak and hickory trees, are long gone. After some extensive analysis of the “metes and bounds” (the descriptions of the boundary lines in the deeds), we are now fairly confident that the area under current investigation is located on the northern 100-acre tract and that the boundary between the two tracts was just east of where we’ve been digging.  A key piece of evidence is a remarkable deed drawn up by surveyor George Da Keyne in 1716.  This deed recorded the conveyance of the southern tract from John Greenwater, a yeoman, to John Poullart (or Pullar), a weaver.  Da Keyne embellished the deed with beautiful drawings of a compass and caliper, an unusual flourish. The drawings remind us of pen-and-ink styles common to Europe’s Late Gothic period.  Da Keyne no doubt meant to convey his skill as a surveyor, but simple trigonometry proves that the metes and bounds do not come close to forming the closed polygon shown by the accompanying map. Errors such as these, which are common to colonial deeds, were no doubt introduced by topography and surveying technique; they simply reflect the state of the art at that time, not incompetence. 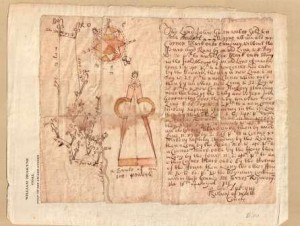 While we are not yet certain of the 18th-century occupants of the Elkins site, we now have two leading candidates: 1). the Greenwater family from circa 1707 to 1741; and, 2). the McCool/Merriss family from 1741 to 1793.  John Greenwater, Sr. was a Welsh immigrant who arrived in the colonies in the late 1690s. He was involved with the establishment of the Welsh Tract Baptist Church in Newark in 1701.  Greenwater appears to have settled on the northern tract between 1707 and 1716 accompanied by his wife Elizabeth Patterson Greenwater and son John Jr. , who inherited the property after his father’s death in 1722.  John Greenwater Jr. continued to own the farm until 1741, when he sold it to John McCool, Sr., a planter, who had two years previously purchased the southern tract.  John McCool, Sr., and his family are of considerable interest since their ownership coincides with the many mid-18th century ceramics and artifacts being found at the site.  So far we’ve traced four generations of the McCool family to the property: 1). John McCool, Sr. and his wife Sarah; 2).  John McCool, Jr. and his siblings Thomas, George and Elizabeth; 3). Mary McCool Merriss, the daughter of John McCool, Jr., and her husband John Merriss, a blacksmith; and 4). the Merriss children Benjamin, Richard, Sarah and two other girls as yet unidentified.  We’re looking forward to compiling more demographic data on these families to help us to develop the site’s historic archaeological contexts. 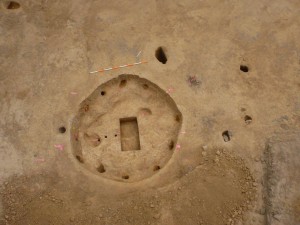 The mysterious pit from above 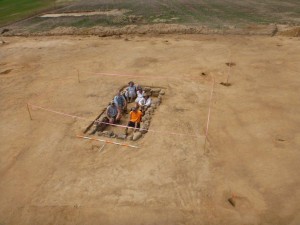