Fieldwork concluded this week on the Elkins site, with work focusing on bisecting the suspected post holes across the site and finishing the larger prominent features.   As could be expected, some of the suspected postholes indeed turned out to be historic posts, while others are now interpreted as “non-cultural” disturbances caused by tree roots or animal burrows.  Having sorted out which is which, we can now start to connect the dots, and, we hope, to the discern the configuration of fences that probably delineated garden and yard areas. Dismantling the stone side walls of the root-cellar revealed that crushed red brick mixed with loam was placed between the large cobbles during construction, evidently to prevent the otherwise dry-laid stones from slipping out of position.  An entrance became apparent in the southwest corner of the root-cellar with a step at the base, implying that there was an entrance into the cellar from outside the house. The large circular feature has now been fully excavated, and although it remains puzzling, we now have additional data to help us work out what it is. 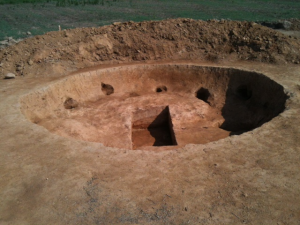 The rectangular excavation seen on the photo was cut by us through the center of the pit to examine the stratigraphy below the pit, and is not part of the original construction.  The pit feature has an approximate diameter of 15 feet and extends three feet below the plowzone. The large post holes, positioned every three feet around the perimeter of the base of the pit, contain smaller posts ranging from four to six inches diameter and angled 10 degrees inward. Rocks originally thought to be positioned under each post are actually wedged under and over the posts to prevent them from shifting or falling inward.  The slabs recovered from the upper center of the fill may be pieces of one larger broken slab.  No other artifacts have been recovered from this enigmatic feature. So we are still wondering: what is it?  We have had several visitors to the site with interesting ideas (see last week’s post), but none are as yet completely satisfactory.  A competing possibility to a wolf trap/pit is a “field root pit” type of root cellar used to store staples such as potatoes, carrots and turnips.  Field root pits are often rectangular but can be circular.  Some also have peaked roofs.  As always your thoughts, are helpful and welcome.