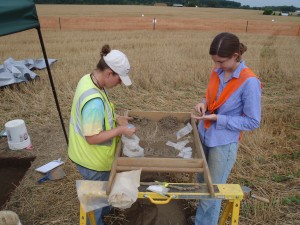 Excavation of the Houston-LeCompt site made great progress this week thanks to the crew’s hard work and much nicer weather since our last update.  Our process of sampling the plowzone using ten 2×2 meter units is complete!  We have sent over 6,500 artifacts to the lab to keep them busy washing, sorting, and analyzing already. Yikes! We are particularly excited to hear back from them about some specific items we found, including jewelry, ceramic doll parts, and several coins. We also started our next big task, which is removing the plowzone from the rest of the site using heavy equipment.  Even at the bottom of our sample units we were finding features, and as the heavy equipment get closer to the foundation area located during the site evaluation, we expect to be finding a lot more. Along with the archaeology, we have also continued to do archival research and GIS mapping of the site. What we have found so far is already helping us to rethink the history of this site. It now appears that the circa 1770s Houston house may have been located west of our site, and we are uncovering the remains of a mid-19th century home instead. The house, built either by Richard Mulford or James LeCompt, was used as a tenant house in the late-19th century. We used GIS mapping and completed a study called “georeferencing”–tying historic maps to modern features and aerials through an overlaying process using specific geographic features as references)–to aid in this identification. Maps from 1849, 1868, and 1893 are helping us with site interpretation, and the marriage of these documents and archaeological finds is coming together very nicely thus far! 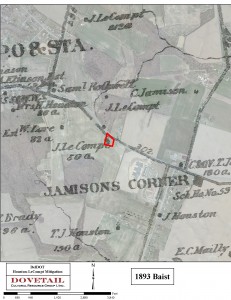 This coming week we are upgrading to even heavier equipment.  A larger backhoe will help us remove the plowzone faster and get the crew back to what we all love doing as archaeologists, playing in the dirt!  Our goal is to have the site completely cleared during our next eight-day work week, so that we can focus the rest of our time on investigating the subsurface features that are revealed.  We are all looking forward to finding out what the root cellar fill has been holding for the last hundred or so years, just waiting for us to find it again.