Mother nature relented this week and gave us some much-needed rain.  This has softened the soil and made much clearer the color and texture changes that are so critical to dissecting and understanding the site.  We have placed sheets of black plastic over the machine-cleared areas to retain the moisture as much as possible.  Progress on the machine clearance has been much better as a result of the rain; the field team have been shoveling and trowelling the cleared areas on the Elkins A site.  As a result we have found several cultural features that are visible as soil stains.  We have not dug into these yet: the job at this point is to identify all the features and only then make decisions about which to excavate fully or sample.  The rain was also an opportunity to send some of the team back to our field lab and process some of the artifacts: too many people on a wet site can damage the archaeology. 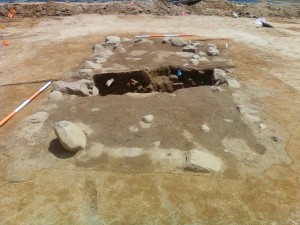 The machine was not used on the area around the house basement that had been identified in the previous phases of work.  Clearance of the plowzone here was done by hand.  The result can be seen on the photograph, which shows the exposed filled-up basement of the mid-18th century house.  The view is facing to the south.   The dark soil filling the rectangular basement is surrounded by the cellar walls which are made of large cobbles, probably brought from the bed of nearby Scott Run.  Some of the stones have been dislodged by modern plowing, but the structure is remarkably intact.  The trench running across the view is the excavation we did in the Phase II study.  We have removed the backfilled soil from this to re-expose the profile across the cellar.  In the middle of this trench you can see a circular feature (just left of the blue plastic flagging): this is the Phase I shovel test dug by our colleagues at Archaeological and Historical  Consultants  which was one of the vital first clues that there was an important site here.  The cellar is about 7.5 feet east-west by roughly 15 feet north-south.  One of the things we will be trying to establish is whether this feature reflects the size and shape of the house above it, or whether the house was larger and the cellar was only under a part.  We have so few examples of other houses of this period from Delaware that either is possible, even though a 7.5 by 15-foot house seems rather small by modern standards!

As of June 20, 2012, work on the south side related to sidewalks, entrances and handicap ramps is ongoing and is complete. We had a few small sections heave due to the excessive heat that need to be replaced. The replacement will occur the week of June 25.

Work is being performed on some additional drainage work to correct some issues that were unforeseen in the original design. This work is expected to be complete June 29th.

Work is being performed to install the signal detection loops and pedestrian signal poles at each of the signalized intersections. This work is expected to be complete by Friday June 22. Upon completion the final electrical connections to the signal cabinet bases will be made to activate the new signals.

Work is continuing on the landscaping around the storm water management ponds. Work is ongoing throughout the project limits to clean up debris, remove the silt fence and topsoil and seed adjacent to the curb and sidewalk.