The Contractor has begun replacing the existing sanitary sewer system along the length and the full width of Elkton Road using a combination of open cuts and the pipe bursting method.  DelDOT has reached out to the businesses along Elkton Road to discuss plans for meeting prior to the Amstel Avenue closure in May.  The purpose of the meeting is to discuss and address logistical concerns associated with the closure.  The Contractor is on schedule to begin the incentive/disincentive work between Apple Road and Delaware Avenue in May.  The project is expected to complete in late 2012.

Work continues at the toll plaza as glass panels are placed for the exterior facing of the new overhead walkway.  The roadwork construction continues in the Northbound and Southbound direction for the new inside High Speed EZ Pass lanes, as well as the outside approach roadway reconstruction leading to the toll plaza. The contractor maintains three lanes of traffic, as well as seven toll lanes in each direction during peak hours of operation.  Daytime lane closures during off peak hours, 9 am to 3 pm, during weekdays and weekends are permitted for work on the overhead walkway and gantry systems. The project is scheduled to be completed by August 2011.

Work started at the beginning of March to construct a new bridge spanning SR1 that will ultimately serve as a new entrance to Christiana Mall once completed.  This project is part of the larger mall interchange project that is currently out for bid.  The contractor is currently clearing the work site and getting ready to drive sheet piling to start work on bridge foundations.  Work is scheduled to be complete on this project in early 2012. 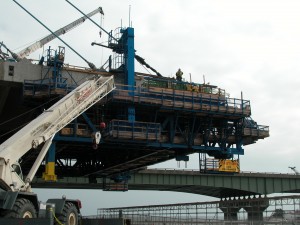 Open House:  DelDOT will once again be hosting an open house to allow the public to come and see the progress being made on the bridge construction.  Check back often for details of the Open House that is tentatively scheduled for April 30th.

Site Tours:  DelDOT is resuming its public and school site tours this spring, so give us a call or email today to check availability and to schedule a site tour for your group. 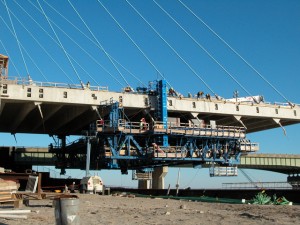 Delaware Department of Transportation (DelDOT) crews continued working through the morning and into the afternoon, to clear roads of snow and ice from the overnight storm, and prepare for colder temperatures that will change conditions for motorists tonight.  Overall, conditions are improved from this morning’s commute.

The Central District (Kent County) maintenance area reports that primary roadways are wet and some may still have a light amount of snow on them.  Secondary and other roads are snow covered.  Over 80 vehicles remain on Kent County roads, with nearly 120 people on duty.  Primary and secondary roads, bridges, bus routes and toll plazas are being salted and plowed.  Roads in Sussex County have been treated.  Primary roads are reported to be dry.  Salting is occurring as needed.

Some transit services remain affected in New Castle County where Bus Route 17 is not going into Holloway Terrace.

The speed limit on I-495 has been increased to 55 MPH; and restored to 50 MPH on the Delaware Memorial Bridge.

Since the start of this most recent storm on Wednesday, DelDOT crews have placed nearly 8,900 tons of salt on the road, with over 7,000 of that total used in New Castle County.  An additional 284 tons of a salt/sand mixture were placed in Kent and Sussex Counties.

Motorists should continue to exercise extreme caution when driving today, and be on the watch for hazards such as icy patches, snow covered roadways, downed tree limbs and power lines.  This afternoon’s commute may also present problems as temperatures drop and wet areas re-freeze.

Crews from the Delaware Department of Transportation (DelDOT) continue to work on roadways in some portions of the state, as the department mobilizes its response to changing weather conditions.  Additional crews are on stand-by and can be recalled if needed.

In DelDOT’s North District (I-95 and North) and Canal District (south of I95 to Kent County), primary roadways are mostly wet; however secondary roads are wet with some locations snow covered.  All other roads in the northern part of the state are reported covered with as much as one inch of snow.  Crews continue salting primary and secondary roads.

The Central District (Kent County) maintenance area reports that all roadways are wet, with some reported as slushy.  Primary and secondary roads are being salted as needed.  Further south (Sussex County), roadways are wet as the precipitation there has been in the form of rain.

Rail and Transit systems are operating normally.  The speed limit on I-495 has been reduced to 45 MPH, and has been dropped again on the Delaware Memorial Bridge, now posted at 35 MPH.  Department of Motor Vehicle (DMV) offices, normally open late on Wednesdays, closed at 4:30pm at three of four locations…Wilmington, New Castle, and Dover.  The DMV office in Georgetown will remain open until 8pm.

Weather conditions will be changing statewide this evening as temperatures drop and the precipitation turns to snow statewide.  DelDOT crews will continue to respond as weather conditions change.  The National Weather Service is forecasting major storm that will have lightning and thunder associated with it.  Snow forecasts for tonight call for an additional six inches in New Castle County.  Kent County could see another three to four inches of snow, with two to three more inches in Sussex County, with lighter accumulations along the coast.

Snow may be heavy at times tonight, so motorists are reminded to use extreme caution.  High winds will cause drifting and reduced visibility from blowing snow, as well.  Residents of coastal areas need to be aware of the possibility of tidal flooding, particularly during high tide tonight.  Inland winds could gust up to 35 MPH, and gusts to 45 MPH in coastal areas.  The winds should die down toward morning, but motorists need to be on the watch for other hazards such as flooded streets, or downed tree limbs and power lines.

The precipitation expected to impact Delaware began throughout the state earlier than expected.  Department of Transportation (DelDOT) crews are at work, and are responding as needed in different parts of the state.

In DelDOT’s North District (I95 and North) and Canal District (south of I95 to Kent County), primary roadways are mostly wet; however some primaries and all other roads are reported as snow covered.  Crews are salting primary and secondary roads.

The Central District (Kent County) maintenance area is reporting that all roadways are wet, with some said to be slushy.  Primary and secondary roads are being salted as needed.  Further south (Sussex County), roadways are wet as the precipitation there has been in the form of rain.

Rail and Transit systems are operating normally.  The speed limit on I495 has been reduced to 45 MPH, and has been dropped to 40 MPH on the Delaware Memorial Bridge.

DelDOT crews will continue to respond as weather conditions change.  The National Weather Service continues to forecast “significant snow” later today and tonight for the northern portions of the state and precipitation this evening should change over to snow, accumulating 4-8 inches.  Similar changes in precipitation are expected downstate with an accumulation of 3-6 inches of snow in central Delaware, and 1-3 inches in the southern portion of the state.

Precipitation could be heavy at times throughout the day, and in northern portions of the state may include a mix of rain, sleet, or snow.  Motorists should use caution and adjust speeds according to conditions.

The contractor will be removing existing road surface from Gravenor Lane to Short Lane. Drainage pipes are being installed from Short Lane to West Park Place and the sewer line is being replaced from Rittenhouse Road to Old Barksdale Road. The contractor, Greggo & Ferrera, will have intermittent lane closures as needed. Delmarva Power will be closing one lane of Elkton Rd at Apple Rd for a gas main tie-in, scheduled for the week of January 17th. All work is dependent upon weather conditions and certain portions of scheduled work could be delayed by inclement weather.