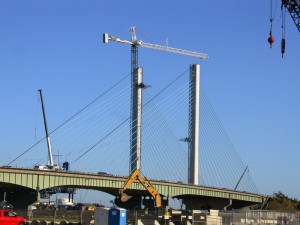 The form traveler from the north side of the bridge was successfully lowered onto a barge and sent to Virginia for disassembly on Monday August 15.  All deck sections on the north side are now complete.  Work continues on the first of 3 remaining segments on the south side of the inlet.  The closure pour that will connect the two sides of the bridge is expected to occur in late October.  The scheduled availability to traffic remains at the end of 2011.  The roadway approaches to the new bridge are also progressing well.  We recently started the process to place “foamed concrete” which is a light weight fill material, behind the abutment on the south side of the inlet.  Some paving of the approach roads has also occurred.

For more information, please visit the project website at irib.deldot.gov.

See updates to the work schedule for Route 54 Improvement Project by visiting the project website.

Amstel Avenue between Elkton Road and College Avenue in Newark is closed.  The contractor has started construction of a box culvert, and is scheduled to re-open Amstel Avenue in August prior to the start of the fall semester for University of Delaware.  The entire project is scheduled to be complete in December 2012.

The northbound highway speed EZ Pass lanes were opened on June 22 and the southbound lanes were opened overnight on June 25/26.   Governor Markell and Senator Carper took a tour of the facility on July 1.  We are happy to say we had no significant traffic backups on the July 4th weekend.   There is minor punch list work to complete that should not significantly impact traffic. A ribbon cutting event is currently scheduled for July 25.

The Department of Transportation (DelDOT) announced that Cherry Hill Construction Company from Jessup, Maryland has officially been awarded the contract to reconstruct and reconfigure the Route 1 & I-95 Interchange. The project is expected to be completed in a little over 2-years, which is a full year earlier than anticipated. Cherry Hill Construction submitted a bid of $85.7 million.  Work is expected to begin in early September 2011. To mitigate traffic impacts, the contract was procured using an A + B bidding format. The contractor bids his proposed construction costs (the “A” Portion) and his proposed contract duration in calendar days (the “B” Portion) when he submits the bid. The number of calendar days is then multiplied by a user cost (determined from a user delay calculation that takes into account traffic, potential detours, delay impacts etc). The Department determines the best value by combining the construction costs and the dollar value of the time. The contractor is only paid the “A” portion for the work performed and is held to the “B” portion for a completion time.  This major project will add high speed connecting ramps from both northbound Route 1 to northbound I-95 and from southbound I-95 to southbound Route 1. This work is the last phase of a multi-year, multi-project Interstate Improvement Program that has included work at the Churchman’s Road and Route 7 Intersection, the replacement of the Churchman’s Bridge over I-95; the fifth-lane widening project, and the reconstruction of the I-95 Newark Toll Plaza.

H-piles for the center pier footing will be installed this week.  The bridge deck rehabilitation work along I-95 over SR 1 for Bridge 716 will continue the week of July 11 using nighttime lane closures in the SB I-95 direction.  SB SR 1 will be closed at the I-95 interchange for bridge painting containment installation and structural repairs on the SB SR 1 piers.  The project is currently on schedule.  Work is scheduled to be complete on this project at the end of the year. 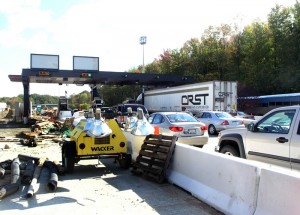 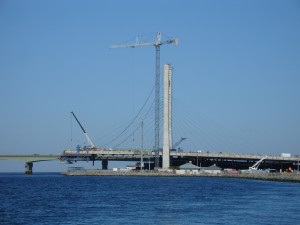