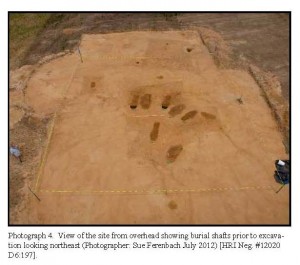 After months of behind the scenes efforts, Hunter Research, Inc. is able to announce the discovery of a small unmarked cemetery at the Elkin site.  The State of Delaware has specific laws regulating the discovery of unmarked human remains.  A discussion of these laws can be found at the Department of State Division of Historical and Cultural Affairs’ website http://history.delaware.gov. A small distinct hill located northwest of the Elkins A site limits was included for investigations during the Phase II investigations. Excavation Unit 17 identified a feature that was thought at that time to be a large structural post, since no artifacts were recovered from the fill. The Phase II report recommended stripping of the knoll based on the topography and the potential for outbuildings and/or an unmarked cemetery, even though few artifacts had been recovered from the area as a whole.

In the last week of June 2012 Hunter Research removed the plowzone from the small hill to further investigate features discovered during the Phase II investigations.  Stripping of the plowzone revealed between six and eight potential grave shaft features facing east-west. These potential grave shafts were assigned letter designations A through H. These suspected unmarked graves were immediately reported to the Director of the Division of Historical and Cultural Affairs of the Department of State, and to representatives from DelDOT. Hunter Research, Inc. was then instructed to test two of the potential grave shafts near the cranial region to establish whether human remains were present. Shafts “B” and “D” were selected for these initial investigations. Human skulls, surviving in good condition, were present in both shafts. These exploratory excavations were backfilled after placing plastic tarps over the remains so that it would be obvious where the remains were when and if excavations resumed. The burial area was then covered with a large plastic tarp and backfilled using a small backhoe.

All efforts were made by DelDOT to avoid the unmarked cemetery but the location, which was directly in the middle of the right-of-way and adjacent to a planned borrow pit, made this impractical. The unmarked cemetery along with a list of potential names was announced in local newspapers so that the next of kin could be notified.  No one came forward and a plan for the physical removal of the human remains was developed for DelDOT by Hunter Research, Inc. in close consultation with Dr. Ashley H. McKeown, Associate Professor with the Department of Anthropology at the University of Montana (Missoula), DelDOT, and the DESHPO. 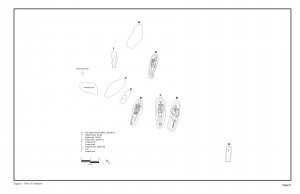