DelDOT has modified the hours during which lanes can be closed on SR26. During the off-peak season, lane closures are permitted from 9 a.m. to dusk. These hours will remain in effect through June 30, 2013. From July 1, 2013 to September 30, 2013 lane closures will be restricted to the hours between 7 p.m. and 6 a.m., Monday through Friday morning.

Lane closures will not be allowed on Holidays and Weekends. DelDOT will monitor the impacts of lane closures and maintains the rights to modify the time restrictions based off of delays.

Brrr…. It’s  cold outside but  but sometimes archaeologists must work through the winter to  help keep tight project schedules. We still have to get the work done even if we “turn into snowmen.” Work on Route 301 archaeology at Rumsey/Polk site has taken some ingenuity including bundling up really well, the use of thermal liners for our one-meter square excavation units, the use of protective shelters, and a trailer for storing our equipment.  The thermal pads covering our excavation units worked very well to keep the ground where we planned to work from freezing despite snow all around us.  So stay warm thinking about all that we are learning from our winter work. RGA archaeologists Mike Gall and Ilene Grossman-Bailey are working hard to get our presentation on the results of the Phase III Data Recovery at the Rumsey/Polk site ready for next month’s  Middle Atlantic Archaeological Conference  in Virginia Beach. We’ll be reporting on our 622 cultural features- posts, pits, earthfast houses, and a ten-meter deep well-  and over 12,000 artifacts of all types from the two periods when people lived at the site – 1740s-1770s and circa 1800-1855. Hope to see you there! 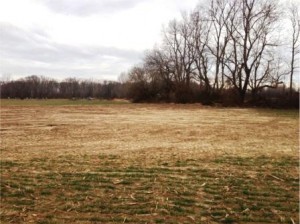 At the end of every archaeological field project comes a long list of chores: the site has to be cleaned up and backfilled, the artifacts all have to be packed up and delivered to the lab, the photographs downloaded from the camera, the photo log digitized, the equipment cleaned and stored. For the 301 project there are other tasks to be done, such as taking these final photos and measuring the archaeological area so the farmer can be compensated for the crops we impacted. Only when all of this housekeeping is taken care of can we move on to the next stage of the project, analyzing the artifacts and preparing the report. Once the artifacts reach the lab, they have to be checked in, and the list of stuff that reached the lab checked against the catalog made in the field. Then they are washed and dried. Meanwhile, special materials are sorted out and sent to the experts who will process them: some soil samples are sent to the ethnobotanist, who will float them in water to separate out charcoal, charred seeds and other organic remains; others are sent to a lab for chemical analysis. We are all excited about the stuff we brought back from the Noxon Tenancy site, because there are so many fascinating artifacts, and so many pots we ought to be able to put back together.

Sherds of a Slipware Porringer Made in Staffordshire, England, from the Noxon Tenancy Site

For the past month Hunter Research has been busy in the lab processing dozens of soil floatation samples, entering information into databases and preparing graphics and End of Fieldwork Summaries for the Cardon-Holton historic site 7NC-F- 128 and the Elkins sites 7NC-G-174.  These sites were evidently not occupied for an extended periods of time and may represent examples of what are termed “contract plantations”.  Contract plantation arrangements were recorded in Articles of Agreement, whereby one or more individuals contracted with a plantation owner for a short, set period of years (5 and 7 being the most common), chiefly to clear woodland and establish viable livestock herds and orchards.  Profits from these items would be shared between the contractor and the owner, and the contractor could also profit independently from crops.  Those engaged in such a contract would be motivated to keep the number of improvements to a bare minimum, making capital investments in only what was necessary to make the property viable for a short period of years.  The limited number of substantial features (i.e. features other than postholes), and the artifact assemblages at the Cardon/Holton and Elkins sites indicate short-term occupations.

Flotation conducted from the Elkins B site cellar hole continues to produce glass trade seed beads (round and tube), scales, straight, pins, egg shell, fish scales, small lead shot, daub, bits of gunflints, small animal bones, charcoal and small land snails.  Land snails are important indicators of past environmental conditions.  Another artifact type of note is the freshwater mussel.  Freshwater mussels (Elliptio complanata) are typically found on Native American sites, and as a rule were not consumed by Europeans during the 18th century in the east.  Mussels are an ingredient of a nutritious Native American food known as pemmican, a concentrated mixture of fat and protein, which was widely adopted as a high-energy food by Europeans involved in the fur trade west of the Appalachian Chain.  Glass trade beads and freshwater mussels suggests the possibility of a Native American presence or at very least interaction with the inhabitants of the site.

The circular feature thought to be a possible wolf pit (trap) contained 263 tabular slabs of sedimentary stone weighing 202.5 pounds that were mainly located in the center of the feature fill. These slabs were resting in a vertical position.  Cross-mending of the slabs revealed they may have originated from a single slab.  These sedimentary stone slabs contained numerous fossils and according to David Parris, Curator of Natural History at the New Jersey State Museum, the fossils are the impressions of Crinoidea columnals (Order Echinodermata) and Mucrosphirifer mucronatus, a brachiopod shell (also known as butterfly shells) from the Middle Devonian strata of the Hamilton Group of New York (with equivalents elsewhere in the Appalachian chain).

Continued research on this feature, including examination of ethnographic accounts of Native American wolf pits in the 19th century American West, now suggests quite strongly that this is indeed a wolf pit, perhaps from the late 17th or early 18th century, possibly dug and used by Indians.  The colonial authorities were very concerned to eradicate wolves in this time period, encouraging and requiring the digging of wolf pits or trap houses, and Indians are recorded to have been paid for wolf pelts.  If our interpretation is correct, this is a remarkable example of cultural interaction in the early decades of Colonial Delaware. 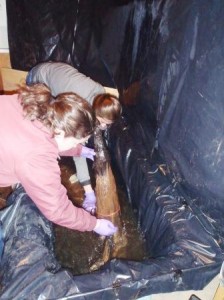 Kerry González and Adriana Lesiuk Conducting the Weekly Cleaning of Wood from the Houston-LeCompt Wells.

During Dovetail’s 2012 summer excavation of the Houston-LeCompt site, 3 wells were uncovered and explored. The wells span the occupation of the site with the first dating to pre-1800, the second to 1800–1865, and the third to 1900–1930s. Initial excavation involved a systematic approach with shovels and trowels. Once sufficient data was collected, a backhoe was brought in at the end of the project to bi-sect the wells in their entirety. Each well contained interior structures buried below the water table consisting of posts and planks hewn from yellow hard pine and white oak. Dovetail retained 14 samples from the wells for temporary conservation.  Wood samples were photographed in the field and after the initial cleaning process.  Measurements including length, width, and thickness were recorded as well as any defining characteristics (i.e. hewn post, nails present, or fastener holes).  The wood is cleaned by hand weekly and resubmerged in clean water.  Given the size of a few of the posts and their shape, Dovetail purchased a fiberglass bathtub to accommodate the larger wood samples. While plans for final curation have yet to be determined, it is likely that some of the more representative pieces with be retained and sent to the Maryland Archaeological Conservation Laboratory for final conservation.