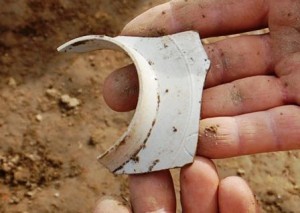 Sometimes you wind up the fieldwork on an archaeological site with firm ideas about what you found, then get into the lab, look over your artifacts and change your mind. Work on an archaeological site is never really finished. Even when the original excavators are dead, somebody may decide to go through the notes and artifacts again and come up with new interpretations. After our first round of testing at Noxon’s Tenancy, we thought the site had a very short occupation. There weren’t very many artifacts in the plowzone, and they all seemed to date to around 1750. So we thought the site might have been occupied for a decade, say 1745 to 1755.

During the excavation we slowly changed our minds. The site has two wells, one used after the other had been abandoned, which seems to suggest a longer occupation that just ten years. We also found more artifacts than we expected. So when we left the field we were thinking in terms of twenty years, say 1740 to 1760.

As the artifacts are cleaned and cataloged we are changing our ideas even more. Several small artifacts have turned up that were made before 1740, and since colonial Delawareans did not usually carry many dishes with them to a new farm site, these artifacts may be telling us that the site is older than we thought. Several sherds of a kind of pottery called “scratch brown” stoneware have been found, probably made between 1720 and 1735. A single sherd of an even older type, buff-bodied earthenware with yellow glaze, has also been identified, and this was probably made before 1725. These few objects are not much to go on, but analysis of the finds is just getting under way. Since we still think the site was abandoned around 1760, it may have been occupied for thirty years or longer. Right now we would date the site to 1730 to 1760, but then again, we still have a lot of work to do.