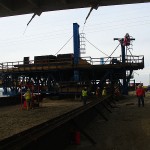 DelDOT is partnering with the I-95 Corridor Coalition to make your holiday drive a little easier this season.  For those traveling throughout the I-95 Corridor from Maine to Florida, the Coalition has created a travel planning site, www.i95travelinfo.net, that will provide real-time traffic information and estimated drive times for roadways in and between major metropolitan areas along the East Coast.

For those specifically traveling to and around Delaware, you can get up to the minute traffic information on the DelDOT Live Traffic Page at https://deldot.gov/Traffic/travel_advisory.  DelDOT also has all of the information that you need to make sure that your travels are easy by following us on Twitter at www.twitter.com/delawaredot.  You can also visit our Facebook page at www.facebook.com/delawaredot, tune to 1380 AM (in Delaware), or go to i95.deldot.gov.

DelDOT would like to remind everyone that as the Christmas and New Year’s holidays approach, construction at the I-95 Delaware Toll Plaza is continuing.

For additional holiday travel information, you can also view the press release issued by DelDOT by clicking here.

For more information, you can always follow us on Twitter @DelawareDOT, visit our Facebook page at www.facebook.com/delawaredot, tune to 1380 AM (in Delaware), or go to i95.deldot.gov.

Construction continues on the new Indian River Inlet Bridge. Three main activities will be occurring on site this month – stay cable installation, transition pier construction and the launching of the form traveler.

Stay Cables
Initial stressing of the stay cables (the blue cables that support the bridge) for several stays is complete. The bridge builders continue to work on the remaining stay cables. This involves threading the cables through a blue tube which ultimately will be appropriately tensioned to hold up the superstructure.

Transition Pier
Work continues on the transition piers (where the approach spans connect to the main span of the bridge) on both sides. In the coming months this portion of the bridge will be constructed, and cable stays will be anchored in the edge girder along the outer edge of the structure. This is a complex portion of the construction contract as it is entirely cast-in-place concrete. The transition pier not only anchors the longest stay cables in this area, but it also supports the adjacent approach span. Likewise, concrete pours will continue to occur for the approach spans on the southside of the bridge.

Concrete Repair
Deck crack repairs near the north and south pylons started in September and are completed. The repairs are going well. The integrity of the deck will be fully restored prior to placing the bridge in service. There have been no further issues with concrete cracking. It is also important to note that the repair work has had no impact on the schedule.

If you would like more information about the project, please visit the Advertisement for Bids or the project website.