This month we’re continuing in our analysis of well data in Delaware, taking a look at well depth and the local water table. Perhaps one of the most salient characteristics of the wells in our sample is that many of them are very shallow. None of those for which bottom depth was recorded is deeper than 30 feet, and all but 4 of those are 15 feet deep or less. Three other wells were excavated to below 20 feet, but the depth at the bottom was not documented for these.  Figure 1 illustrates the data for the 20 wells for which the bottom depth was identified. The depth recorded by the archaeology is shown (the height of the bar) along with a blue line that shows the average depth of the water table according to the Natural Resources Conservation Service, a division of the USDA that collects data about soils and water. The red line on some of the bars indicates the depth at which archaeologists recorded the water table. Most of the excavated wells show a close agreement between the predicted or observed water table and the depth of the well.

This has obvious implications for the technology used to dig and line these wells, and also for the potential reliability and quality of the water obtained. With the exception of the wells at 7NC-B-11 (Weldin Plantation) and 7K-C-203 (John Powell Plantation), the wells in the sample were dug little deeper than the water table. One advantage of shallow wells is that they don’t require any special technology to dig, and you can get away with fairly expedient technologies for linings, like using barrels. On the other hand, such materials might be more prone to fail than masonry linings, requiring that site occupants dig new wells periodically. In fact, 12 of the sites in the sample include multiple wells that may have been used in succession, including the Moore Taylor Farm (7K-C-380) which had five wells. Shallow wells might also be prone to contamination.

One significant problem with this data set is that the original constructed depth of the well was only recorded for 20 of the 53 features documented. Not fully excavating a deep well is understandable, given the challenges and hazards associated with excavation below the water table.  However, not documenting the base of the well poses an obvious dilemma for interpreting well technology in Delaware. Answering the question about whether people in Delaware sometimes dug their wells deeper to avoid them running dry requires that the bottom depth be determined and clearly documented. Finding the base of the well may also be important for dating, since material deposited at the bottom of a well may indicate the period of use and abandonment. Material recovered near the top of a well, in contrast, may be related to much later activity, perhaps when the site as a whole was abandoned. 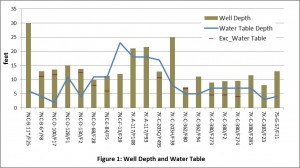