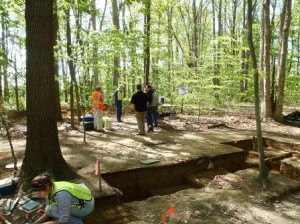 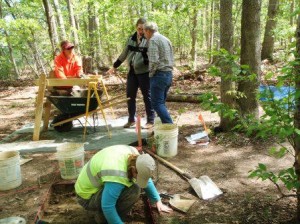 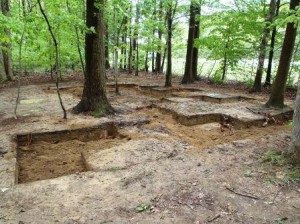 Phase III fieldwork at the Warwick Site ended on May 9th, with the completion of 33 test units.  Fifty-nine square meters, or roughly 635 square feet, were excavated during the Phase I through III fieldwork.  All artifacts have been returned to the lab for cleaning and detailed analysis.  The artifacts will be measured, weighed, and classified by type of stone, reduction stage, and shape.  Reduction stage refers to extent to which tools have been shaped and thinned, and to the point in tool manufacturing when flakes were removed.  For example, during the initial stage, as the tool is roughly shaped, flakes tend to be large and the weathered exterior of the stone, termed the cortex, is often present.  In contrast, sharpening a finished tool tends to produce small flakes that lack cortex on the flake.  In addition, points will be classified by reference to standard sources, like William Ritchie’s A Typology and Nomenclature for New York Projectile Points and Noel Justice’s Stone Age Spear and Arrow Points of the Midcontinental and Eastern United States; on-line information posted by Delaware’s Historic Preservation Office (http://history.delaware.gov/archaeology/points/start.shtml) and Maryland’s Jefferson Patterson Park and Museum will also be consulted (http://www.jefpat.org/diagnostic/Maryland_Projectile_Points/index-projectilepoints.html).  The information will then be typed into a data base for analysis. 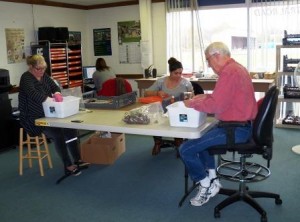 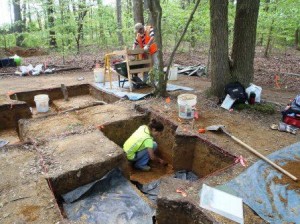 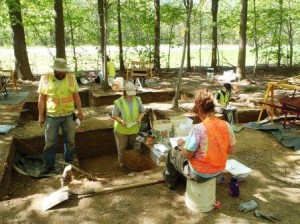 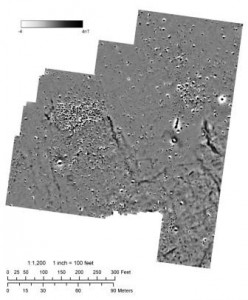 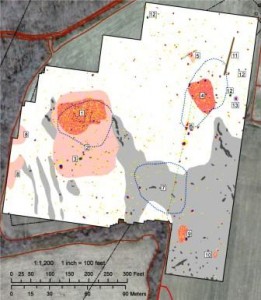 Watch as Mike Klein, Archaeologist, from Dovetail Cultural Resource Group discusses the excavations at the Warwick Native American Archaeology site for the US RT 301 project.

Watch as Michael Carmody, Archaeologist, from Dovetail Cultural Resource Group gives an update on the excavations at the Warwick Native American Archaeology site. 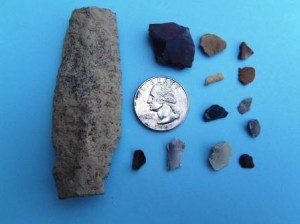 Continuing work at the Warwick Site completed the excavation of roughly half of the open units. Plowing, among other processes, appears to have obliterated any evidence for structures, hearths, or storage pits.  For the most part, artifacts occurred in the plow zone and the uppermost portion of the subsoil.  Below that depth, artifact density dropped precipitously, with only a few small pieces of sharpening debris from stone tools were recovered per level.  Although archaeological sites exhibiting a layer-cake accumulation of living surfaces from different periods of time are known in the northern Delmarva Peninsula, plowing, burrowing, and roots likely explain the artifacts recovered below the uppermost portion of the subsoil at the Warwick Site.  .

Various point forms traditionally assigned to the Late Archaic and Early Woodland periods, similar to those recovered during the earlier fieldwork, have been recovered.  Yellowish brown jasper appears to predominate, though red jasper, gray chert, quartz, and quartzite have been recovered.  Tools include a few bifaces and unifaces, the latter including a few with tools with steep edge angles typical of hide scrapers.  Scattered fire-cracked rock has been recovered; the sole potential feature, however, is three fired rock fragments at the interface between the plow zone and subsoil.  The generally low artifact density and predominance of small sharpening flakes seems consistent with tool sharpening and limited food preparation by small groups during short-term stays, the sort of behavior described by studies of locations where modern Arctic hunters monitor game trails. Further excavation during the next session of fieldwork, of course, could identify a long-buried deposit of artifacts, the remains of shelters and hearths, or areas where different types of artifacts cluster. 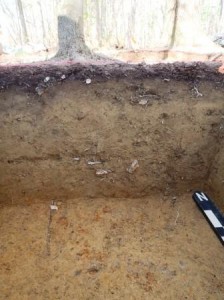