The Report on the Analysis of Flotation-recovered and Hand-collected Archeobotanical Remains from the Elkins Sites (7NC-G-174),

Phase III archaeological data recovery at the Elkins Sites (7NC-G-174) in New Castle County, Delaware, was conducted by Hunter Research, Inc. as part of the Delaware Department of Transportation’s U.S. Route 301 Development Project.   The Elkins Site complex comprises the Elkins A site, the Elkins Burial site and the Elkins B site – three discrete but closely tied archaeological components with historic occupations focused during the eighteenth century.  Elkins A describes a domestic site occupied from ca. 1740 to ca. 1780 that overlies a prehistoric occupation.  The Elkins Burial component describes a small cemetery plot containing five individuals preliminarily dated to the late 17th or early 18th century.  The Elkins B component is a briefly occupied historic site in use from the mid-1720’s through the early 1730’s.  A prehistoric component has also been identified at Elkins B.

Research goals of the data recovery effort include exploration of the relationship between the three site components, definition of cultural occupancy and ethnicity, delineation of landscape and exploration of site economies.  Excavated features yielded carbonized plant macro-remains which relate directly to these research themes.  Importantly, archeobotanical data from the Elkins Sites contribute to the regional archeobotanical dataset.

SUMMARY OF THE RESULTS

Some particularly notable features were excavated at the Elkins sites:  The domestic cellar at Elkins B produced the richest deposits of macro-botanical remains (99.6 percent of the total carbon recovered through flotation at Elkins B).  Recovered remains included concentrations of field crops (wheat, wheat/oat, maize, pea, bean), fruits (peach, cherry, grape), weedy growth (sedge), and morning glory (Ipomoea sp.) which may have been employed as a medicinal or ornamental plant.  Wood charcoal (oaks and hickory) recovered from the Elkins B cellar likely represents the remains of fuel wood.  Each of these is a high-calorie wood that would have been locally abundant (Graves 1919).    The Wolf Pit feature identified at Elkins A presents a regionally unique feature type.  Analysis of one flotation sample and five hand-collected carbon samples were scrutinized from this feature.  Archeobotanical remains from the Wolf Pit were limited to wood charcoal.  Pine was the most abundant wood type identified, followed by hickory.  Unidentifiable deciduous species were also recorded.   While not definitive, the recovery of these taxa from the pit may reveal details of trap construction.

Archeobotanical remains from the Elkins sites derive from 16 flotation samples and 34 hand collected samples.  A variety of economically important cultivated and wild plant resources were documented within the assemblage.   A rigorous program of soil flotation (approximately 651 liters) and hand-collected carbon samples produced historically significant plant macro-fossils, including wood charcoal, a range of field crops (including bean, wheat, maize and peas), cultivated fruit pits and seeds, limited evidence of medicinal and ornamental plants, along with vegetal miscellany.  The results from the large domestic cellar excavated at Elkins B were particularly informative, providing strong evidence for a working farmstead where the cultivation of field crops and orchards were important pursuits. 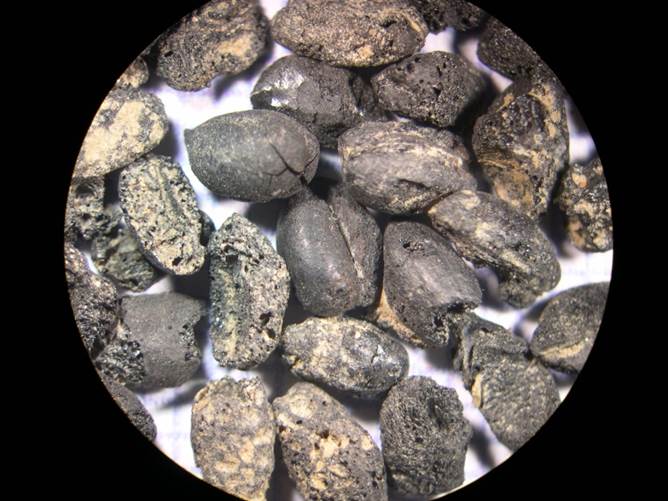